Community Fosters Accessibility: A Dispatch from the 2017 Coleman Institute

One of the can’t-miss conferences on PEAT’s yearly line-up of events is the Coleman Institute Conference on Cognitive Disability and Technology. For one full and fruitful day, the Coleman Institute brings together influential leaders from around the globe to share insights and advance conversation around technology access and inclusion for people with cognitive disabilities. This year, PEAT had the opportunity to learn from experts working on the latest research on technology for people with cognitive disabilities, and to share with attendees the work we do around public policy and accessible workplace technology. 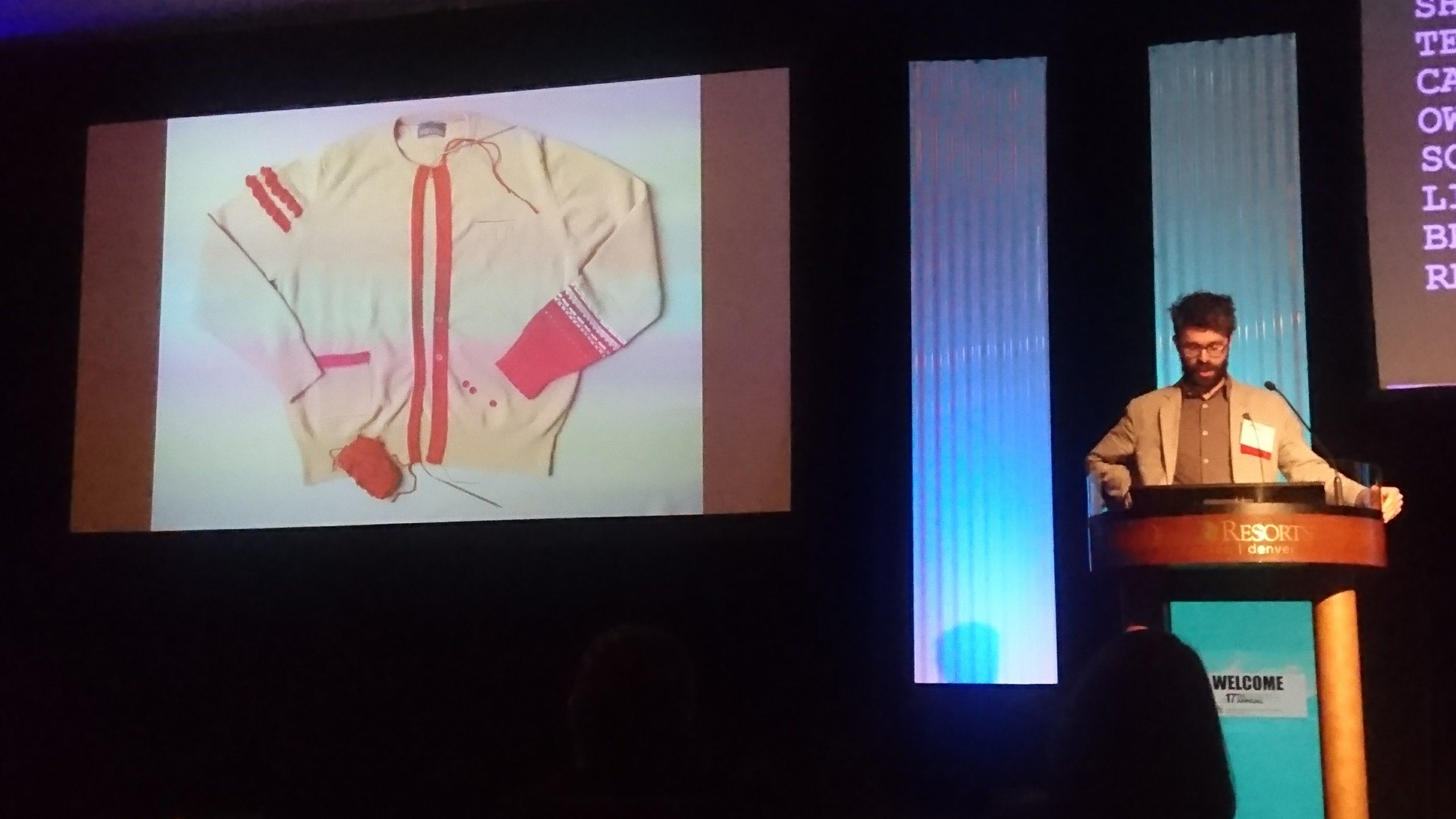 ​During his talk on the future of technology, Colin Clark, Lead Software Architect at OCAD University’s Inclusive Design Research Centre, called upon technology designers and developers to engage in “co-design.” That is, collaboration is key when it comes to designing technology that enables people with cognitive disabilities to participate fully in their communities, education, and workplaces. Truly accessible design results when designers seek out and work with everyone from artists and thinkers to accessibility experts, and initial testers to end users. It must be a community effort.

Colin also talked about the importance of designing technology in a way that allows the end user to adapt it as necessary. He explained this using an analogy to knit clothing: usually, when a consumer purchases knitwear, they are unable to knit their own custom alterations into the garment. Some skilled knitters, though, are able to “re-knit” store-bought clothing to suit their tastes. In technology terms, many products are designed to work in only one way, so they’re not easily customizable for accessibility purposes. However, if designers create technology with less rigidity, allowing for customization, all end users, including people with disabilities, will benefit.

One of the liveliest panels of the day focused on “The Future of Industry Partnerships.” It  featured Aaron Bangor, PhD, Lead Accessibility Technology Architect at AT&T, Stephen Ewell, Executive Director, Consumer Technology Association (CTA) Foundation, and Meghan Lawrence, PhD, Senior Technical Accessibility Evangelist at Microsoft. Panelists tackled the question of where technology is headed, and how it can be developed in inclusive ways.

When asked about exciting promises that today’s technologies hold for people with disabilities, Steve pointed to many advancements in health and wellness. Megan highlighted the potential of artificial intelligence (AI) in creating human-based data, though she noted that it’s critical that these datasets include diverse behaviors in order for these systems to ensure inclusion. Aaron then pointed to innovations in application programming interfaces (API), noting that user experiences today are increasingly tied to personalization–and the result means that assistive technology is now embedded within mainstream phones, rather than requiring a separate custom device. Today’s gap, he noted, is now mainly in training and awareness, and he stressed that the best results for accessibility awareness will arise from developers and employers working directly alongside coworkers with disabilities.

Panelists were then asked what technology advances we can expect in twenty years, but all agreed it is nearly impossible to speculate that far out. Megan, for example, noted that touch screens were invented in the 1970s, but are only recently taking hold as a mainstream interface–and few might have predicted that touchscreens could be created in an accessible manner. All unanimously felt that to create successful technology, the common element is people, and that technology always needs to adapt to the myriad ways that humans work (rather than the other way around).

Deputy Project Director Corinne Weible contributed to the robust selection of conference breakout sessions with a presentation on PEAT’s Policy Matters tool. This free centralized resource has plain language articles, policy briefs, and analyses that cover what’s happening in the world of accessible technology-related public policy. Corinne explained that Policy Matters can help employers, technology companies, and employees understand their rights and responsibilities—from the development and design phase to the implementation of technologies in the workplace. Additionally, Corinne emphasized the key role that Policy Matters plays in keeping stakeholders informed about ways to help effect change to ensure that workplace technology is accessible to all employees—including those with cognitive disabilities.

Each year, the Coleman Conference’s collaborative, action-oriented atmosphere inspires PEAT to further our mission of fostering collaboration and action around accessible technology in the workplace. As a tight-knit community, we can continue to bring about true progress in making workplaces supportive, inclusive environments where everyone’s skills and talents can shine.